A few weeks ago, I came across a small red photo album in a car boot. Again it appeared to be in an assortment of bric a brac and household clearance stuff. At first glance it didn't appear to be very interesting. But once home. I discovered there were names on the back of most of the photographs. Some Victorian copies and some original. A few World War one soldier photos and names from Wilder, Batho, Felton, Butler, Evans, Merchant and Puffer families. Some of the families lived here in the West Midlands and some in London. 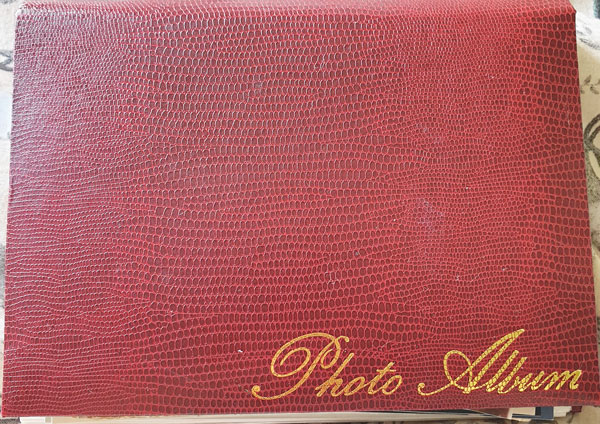 On Ancestry, I have traced the families and added the photographs as able. This is to aid anyone tracing their family trees. I don't know how this small collection ended up in a car boot. But I know that many branches of this family looking for details. So here are all the photographs for browsing. Any further information - please contact me. 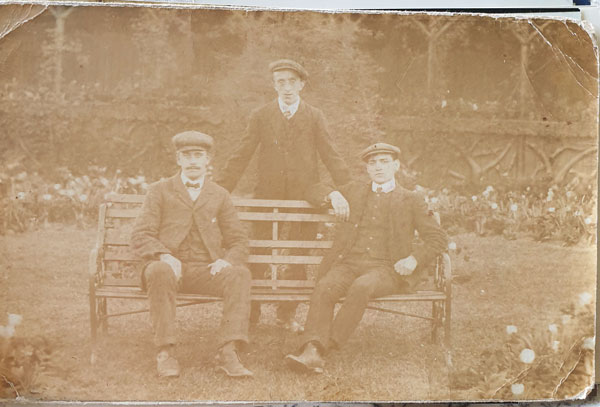 Three young men sat on a bench. Looks to be pre world war one. Postcard with no information on the reverse. Is one of the men in the photograph below? 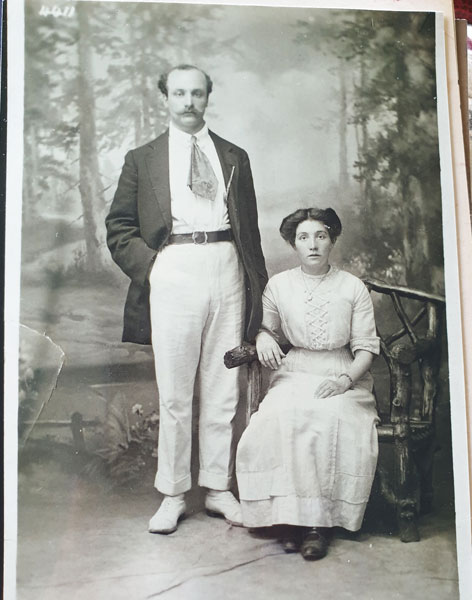 A copy of the original. Looks to have been re-photographed from an album. It has Ada Butler on the reverse. This looks to be Ada Butler who was born in 1888 and died in 1960. Her nickname was "Tot". This photo may be of her fiancé as she is showing off a ring on her finger. But she appeared not to have ever married. 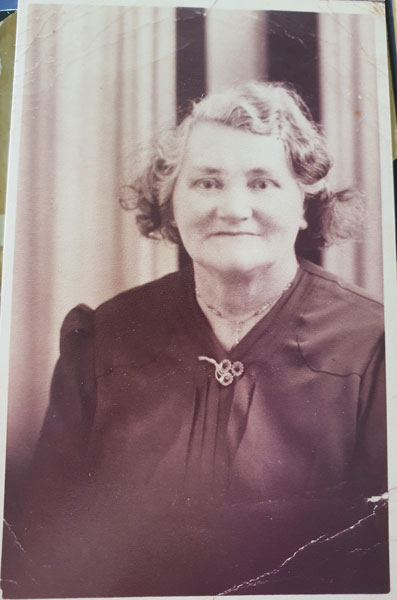 No name on the reverse but appears to be Hepzibah Georgina Florence Butler born in 1906 and died in 1970. She lived in Kent. She is shown on another family tree on Ancestry website and named. 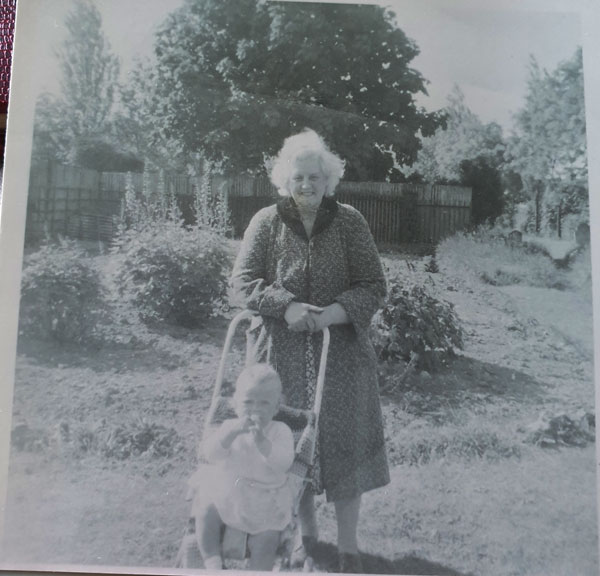 This is another photograph of Hepzibah Butler. On the reverse in pencil is "Aunt Hepzibah". Here she is a little older and I have been unable to identify who the baby is. 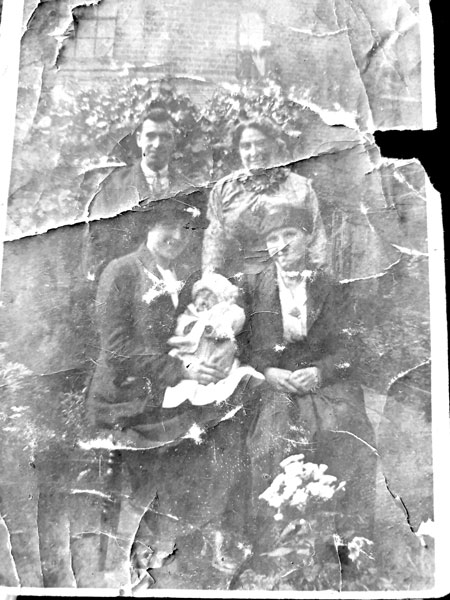 This is an original photo - a little creased and torn. It has been removed from an older photo album. On the reverse in pencil it has - grandfather, grandmother, Anid, Ema and Mum. Above two strips of paper have been stuck onto the back. It says GT Grandparents Batho back, Aunt Em, Nan Buck, front. Uncle Hector. 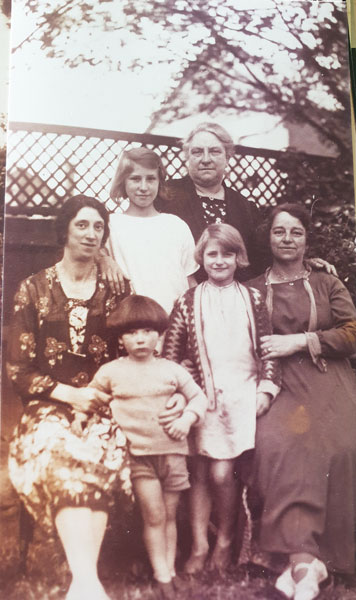 This is a copy of the original. On the reverse is written - Nanny Batho *Pat Ingram. Aunt Sarah (Wilder) NB's sister (written on left side) Aunt Lizzy NB's sis in law(written on right side) Mum (written in the middle) Aunt Lizzy daughter, Little boy ? maybe Aunt Lizzy's son.

I have yet to work out who is who on the photo above. But watch this space... 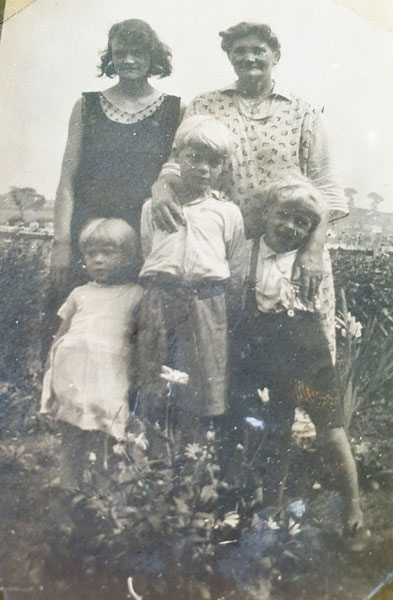 This is an original photo. Written on stripes of paper on the back is the following: Back Aunt Ollie and Grt Grandma (Ingram)? Buck. Aunt Gwen, Uncle Bill, Left to right taken in Laindon. 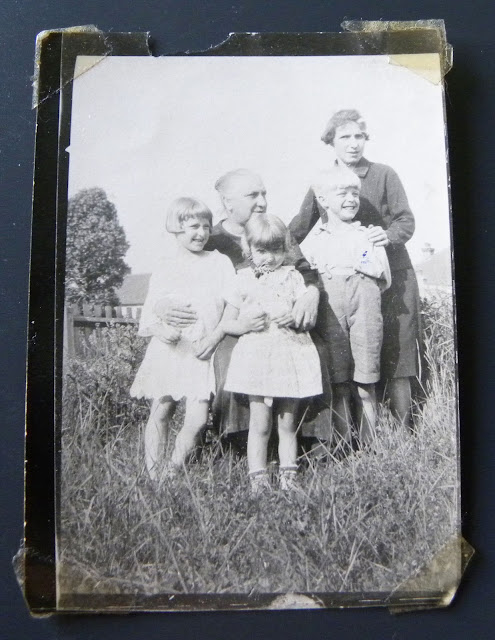 This original photo, has been taken out of an old album by the looks of it. On the back on paper stripes it has pen written names. Back GT Nan Batho. Nan Buck, Front Mum, Cousin Pat, Uncle Billie. Cousin Pat has (Nan Batho's brother daughter) underneath. 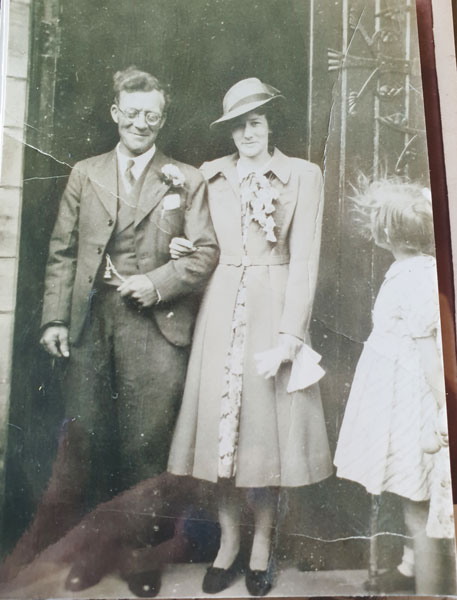 A nice 1940's wedding photograph here. It is a copy of the original with Uncle Charles and Aunt Nesta written on the back faintly in pencil. This is Charles Alfred Challenger Buck 1902 - 1962 and his wife Nesta M Bennett 1910 - 1996. Both born in Kent. They do not appear to have had any children. 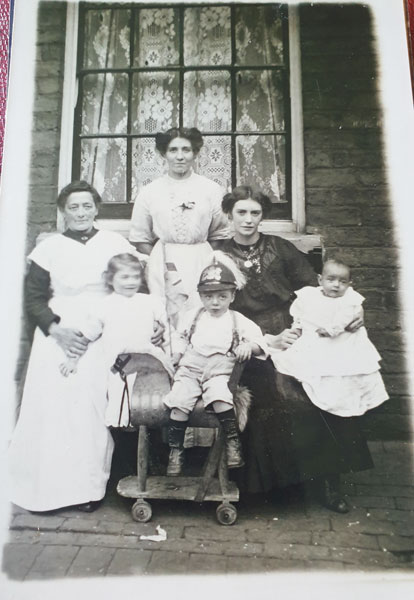 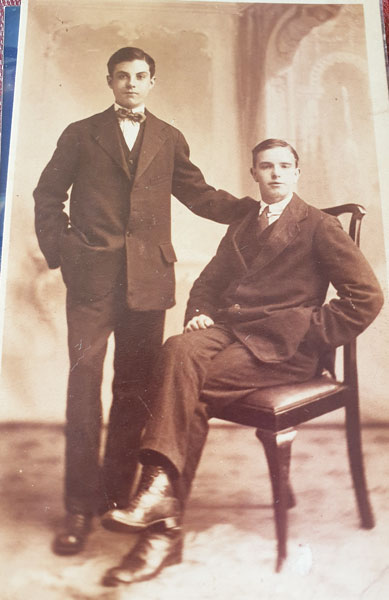 A copy of an original photo. No names on the reverse. From research it appears to be Frank Felton standing. Frank William Felton 1908 - 1986. No idea on who the man sitting is. 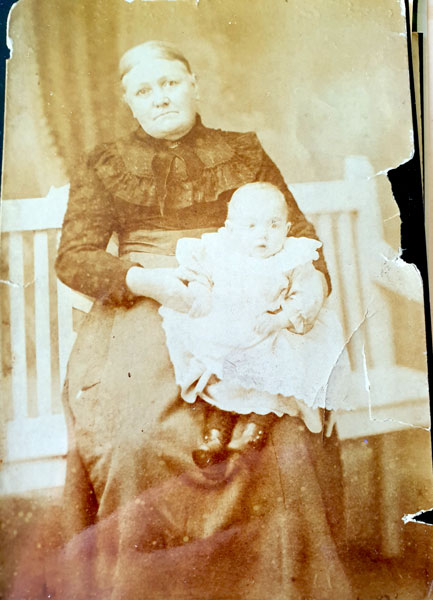 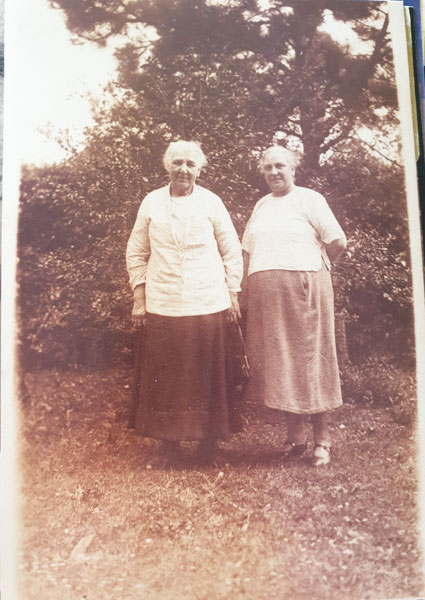 Two elderly ladies in this photo. Its a copy of the original. No names on the back but from looking at the other photos in this album. I would say this is Mary Ann (Polly) Evans 1865 - ? Married name Butler. Also Ada 1889 - 1960, who appeared not to get married - see the photo of her earlier in this blog. 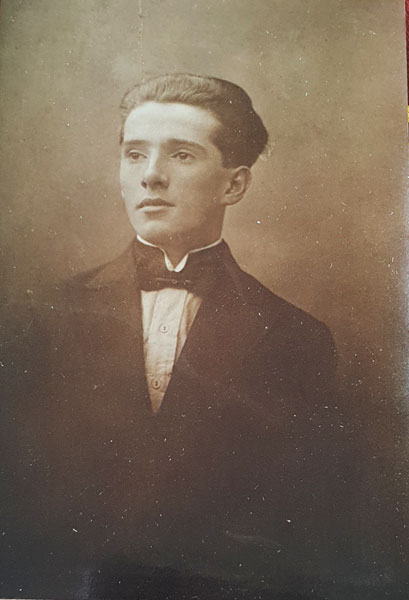 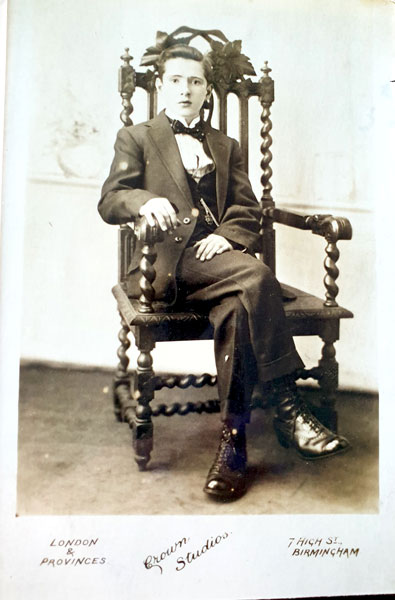 Again a copy with Thomas Puffer on the reverse. Taken at The Crown Studios, 7 High St Birmingham. Again it is one of the above men. Can not find any details on the Crown Studios online as would help date this. 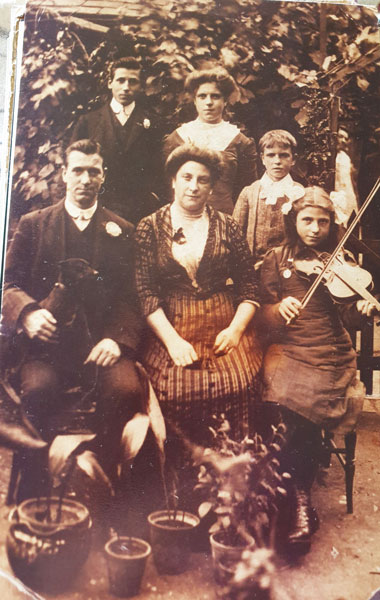 A copy of an original and unfortunately no names on the reverse. From another photograph I would say two are Henry Frederick Batho 1873 - 1929 and his wife Florence Eliza M Ingram 1877 - 1953. However only 2 of their children lived past babyhood. But as the 2 standing at the back are very similar to the two adults sitting they are either children or sibling. So haven't worked out who they are just yet. 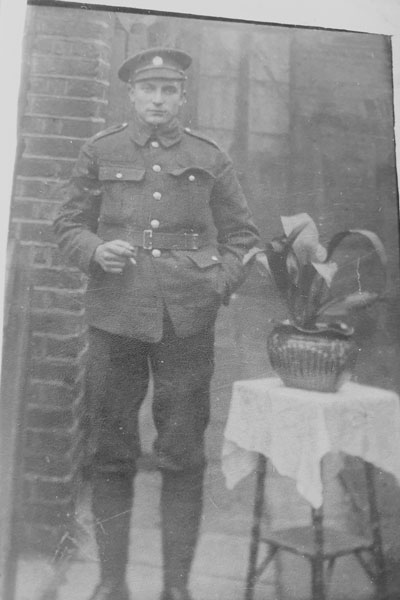 Unnamed WW1 soldier. A copy of the original. Love the pose with a cigarette and pot plant on a table. I wonder if he survived the war. 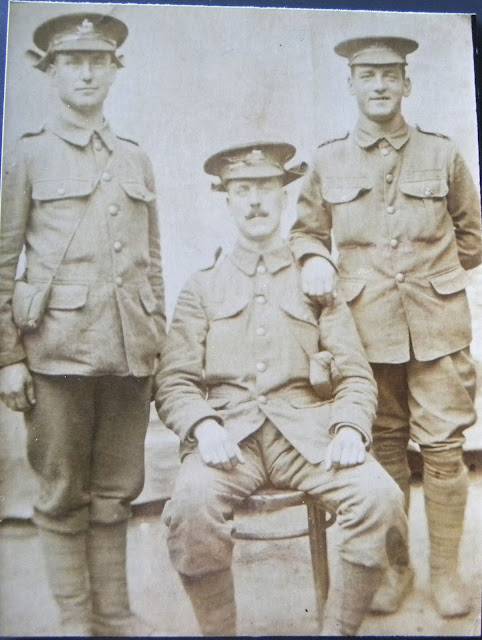 A copy of a World War one photo of 3 men. One is named. Frank Butler standing on right written on the back in pen. Now technically this is the man with his hand on the seated man's shoulder. His hat badge is not visible. But the man on the left has the Royal Warwickshire regiment badge. Frank served in the RWR and unfortunately died in 1922. I can not work out if one of the men is the same as above photo from this and the man seated looks to be Ada Butler's fiancé in an earlier picture!! 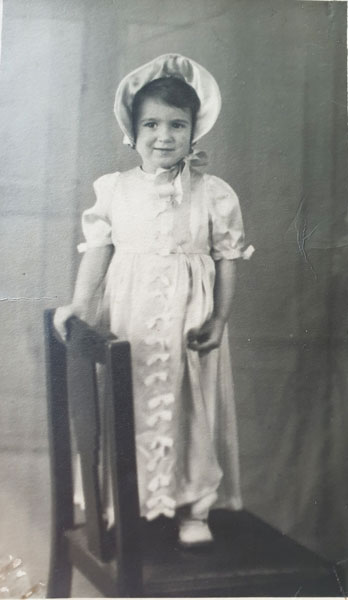 An original photograph with "To my darling daddy from your everloving daughter Yvonne xxxxx xxxxx" on the reverse. Stamped 22 Oct 1945. This is of Yvonne Lillie Florence Butler 1942 - 1916. 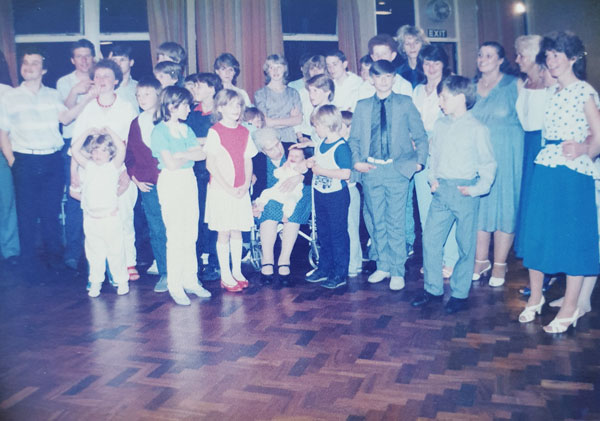 A recent 1980s photograph. Going on the mullet hairstyles and clothing at a party. It is written on the back "Thought you would like this" I think as the first word is difficult to read. No other details. 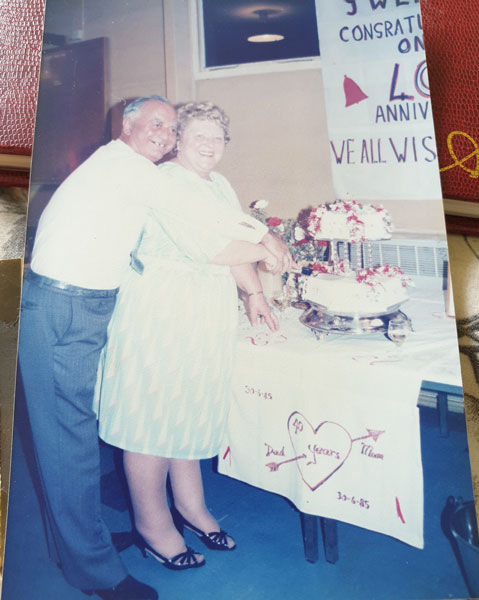 If you have any further information - then please contact me via the leaving messages. I screen all before publishing so no contact details will be published. For this blog, I have researched other family trees and looked at the names on the back of all the above photographs However, I have not obtained any certificates to verify any of the names or dates. If you are undertaking family history research, it is advisable that death, birth and marriage certificates are obtained to make sure you have the right people in your tree. Along with any other certificates and information.

In the last few weeks, I have had three family members contact me regarding these photographs. One via Ancestry and two by this blog. Having scanned and sent the copies to each of them. This little red book of photographs has been sent and re-united with the sister of the woman who originally owned the album. Thank you to all for contacting me.