Stechford War Memorial was one that I did not register was there. For years I traveled by bus (no 11 Outer Circle) to school and passed within walking distance. Then later in life I would drive by here when visiting patients as part of my Registered Nurse training. In 2007, when I first started this project my husband took me to Stechford to see this war memorial. It is in the middle of an island at the junction of Albert Rd, Lyttelton Rd, Richmond Rd and Yardley Fields Rd/Stuarts Rd. This junction is known as Five Ways. My photographs were taken in early 2007 and since then this memorial has been restored.

It is totally dedicated to the men who died from Stechford in the First World war. 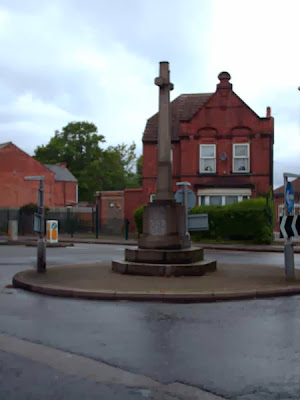 The war memorial has a total of four plaques. One that has  the dedication and three with names of a total of  52 names. Stechford was at the time of the war a rural village surrounded by fields. Houses had been built around the railway and the five ways roads had just been built in 1907. So to loose 52 men from this small community must have been devastating. Not forgetting the injured as well. At Victoria Rd, Stechford, the annex hospital called Stoneleigh was in service from 1916 treating the wounded. This 62 bed hospital treated over 1000 men. 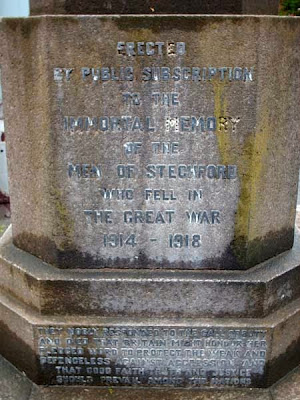 Erected by public subscription to the immortal memory of the men of Stechford who fell in the Great War 1914 - 1918.

Below that is another dedication:

They nobly responded to the call of duty and died that Britain might honour her pledged word to protect the weak and defenceless against aggression and that good faith truth and justice should prevail amongst the nations. 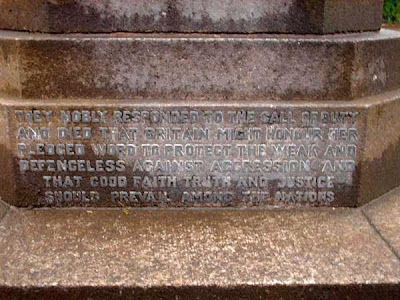 The names on the first plaque are as following: 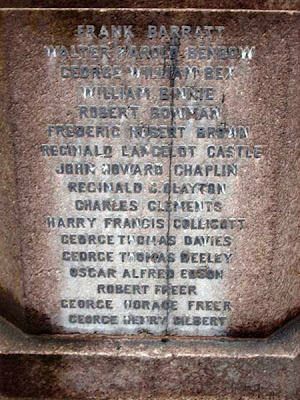 On the second plaque are the names of more men: 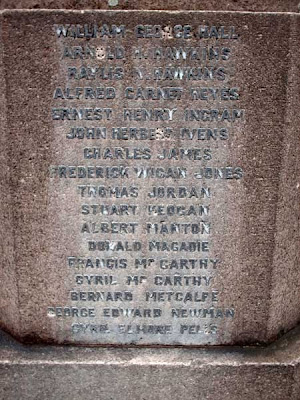 The third and last plaque has 18 names on and are as following: 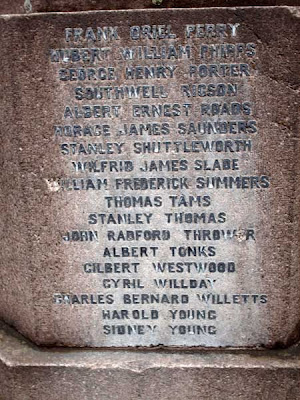 I always undertake a little research on a few men and it always amazes me to the fact that the men or their family may not be as local as assumed. Alfred garnet Hayes is one such young man. He died at 19 years of age on the 15th July 1916. A private in the Royal Army Medical Corps for the 1st South Midlands Field Ambulances. He is buried in France after dying from his wounds. Alfred's parents were Arthur Henry and Flora Heyes who lived in Torquay Devon at 33 Shirburn Rd.

Harold Young was just 20 when he died on the 4th March 1917. He was in the Worcestershire Regiment as a private. His parents W J and Mary Young lived at 55 Victoria Rd, Stechford. He is buried in France.

George William Bex was a private in the Royal Army Medical Corps for the South Midlands, Field Ambulance Regiment. His parents were Oliver Graham and Isabella Bex of 119 Albert Rd, Stechford. He died of wounds at 23 years of age on the 25th July 1916. His family were originally from Liverpool and from a quick research, he was the only son of Oliver and William who had two daughters as well. A clerk by trade.

Whilst researching this memorial it was very evident that is still commemorated in the community, who have strong community values.
Posted by Sue at 12:22