Years ago now, I went to visit the Olton Friary cemetery looking for an ancestors grave. Not at that point was I recording war graves and I can not really remember why, but I took a couple of photographs of three war graves in this cemetery. A little later researching the war graves I discovered 20 graves erected by the War Graves Commission were situated in the Olton Friary's cemetery.
The Cemetery and Catholic church are in the grounds of the building that was erected in 1873. Initially as a the St Bernard's Catholic Seminary or a place that priests trained. This was moved in 1889. The plot was taken over by the Capuchin Friars and it became the Franciscan Monastery of Immaculate Conception.. In 1981 it again changed hands and was taken over by the Sacred Heart fathers and brothers of Betharram. the Church of the Holy Ghost and Mary Immaculate, also known locally as the Olton Friary was built in 1929.
I am not sure if there is a war memorial plaque in the church but here some of  the war graves in the attached church yard. 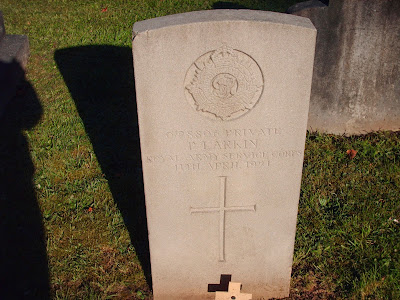 Private P Larkin of the Royal Arm Service Corps who died the 11th April 1921. 0/28806
This was Patrick Larkin who was 25. Residence at 6 Back 60 Bordesley Street, Birmingham. A tool maker by trade who died from TB. His mother Margaret was a widow and charwoman. When researching I sent for several death certificates. Patrick's was one of them. 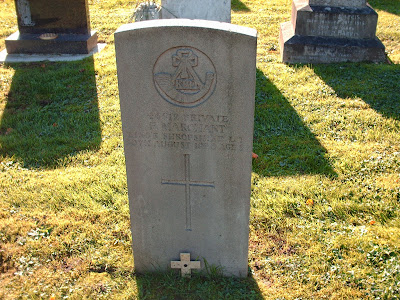 Now the War Grave Commission has 20 names but in the "scatty Sue" tradition I have only written down 19. So I will update this blog with the 20th name and more photographs later this year after I visit again.

Here are the men that I have with some research:

William Narey Boocock, second lieutenant of the Royal Warwick Regiment (retired). He was 26 years old when he died on the 3rd March 1919. Son of James Henry and Mary Boocock. He was born in Bradford in Yorkshire.

Now when researching, I discovered that the mens graves were not always where you thought they should be. The above is William's death certificate. He died in Gloucestershire, Bristol of the flu and pneumonia. His father lived in London and William gives his last address as being Ben Rhydding, Warwick rd, Acocks Green in Birmingham. It appears that the family run a hardware store probably on the Warwick road.

Martin Carty a sergeant flight engineer of the Royal Airforce Volunteer reserve. He was 36 when he died in December 7th 1944. Number 2221707. Son of Michael ( a police constable) and Ann Carty of Birmingham. Husband of Phyllis Ada Carty of Billesley in Birmingham.

James Cooney, a private in the Royal Warwickshire Regiment 4th Battalion. He was 26 in November 11th 1916, when he died of the flu. His number was 22427 and his last address was 52 Willis Street, Ashted, Birmingham.

He died at the military hospital on the Isle of Wight.

James Brian Egan, Sergeant (W OP/Air Gnr) of the Royal Airforce Volunteer Reserve, number 2220647. He was 20 on the 18th April 1945 when he died. Son of Joseph and Winifred Clara Egan of Olton, Birmingham. James lived at 111 Reservoir Rd, Olton.

Arthur Guest corporal in the Royal air Force (Auxiliary) 916 Balloon Sqdn. He was 32 in February 12th 1943 when he died at the Emergency Medical Service Hospital, Warwick. Son of George Frederick and Emily Guest Husband of Mary Olga Irene Guest of 374 Warwick Rd, Solihull.

Thomas Bernard Hames, private Royal Army Ordinance Corps. He died on the 8th March 1943. Service number 7593427. Son of Edwin Percy and Maud Hames of Birmingham and husband of Winifred May Hames of Balsall Heath. Born in 1917 in Bromsgrove and aged 26 years when he died.

Bernard Francis Hare, Aircraft man 1st class of the Royal Airforce 44 sqd. He was 21 and died on the 14th November 1940. Service number 648104. Son of Bernard Thomas Hare (silversmith) and Mary Hare (nee Hyland) of Birmingham. He was born on the 4th November 1919 in Birmingham. This family was so sad to research. Mary Hare was widowed in 1930. She lost a daughter at 2 years and then her only son at 21.

Claud Ambrose Harris, Craftsman of the Royal Electrical and Mechanical Engineers. Aged 38, he died on the 12th April 1945. Husband of Christine Frances Harris and son of Clement and Florence Harris. Service number 14276558. He is interned in the family grave. His last address was 133 Stratford Rd, Shirley. Claud died in the Military Hospital in Lincoln.

Dennis William Harris Flight Sergeant (Nav) of the Royal Airforce Volunteer Reserve number 1580053. He was 23 and died on the 18th December 1944. Son of William Clarence and Gertrude Agnes Harris of Kings Heath, Birmingham. Unfortunately I could find no information about this young man.

Edward Peter Jackson, private Lincolnshire Reg, York and Lancaster Reg 11th bn. Number 14733056. Son of Thomas C Jackson and Margaret Jackson of Acocks Green. he died at 19 on the 5th January 1945. Again I can find no further information on Edward.

L Jones, private in the Royal Army Medical Corps. He was 32 when he died on the 15th March 1920. Son of Thomas H Jones and husband of Catherine Jones of 13 Leason Lane, Low Hill Wolverhampton.

Edward Mortimer Lane was a gunner in the Royal Artillery 120 Field Reg. At 20, he was just too young to die on the 1st May 1940. Son of Charles Henry and Charlotte Elsie Lane of Kings Heath, Birmingham. Little to add only that his death was registered in Warwickshire.

Gerard Scully sergeant (bomb aimer) of the Royal Airforce Volunteer reserve, 77 squadron. Service number 1219445 and son of Thomas and Freda Veronica Scully of Edgbaston. He died at 21 on the 13th May 1943.

Anthony Smith, staff sergeant of the Royal Army Service Corps. Aged 42, he died on the 10th November 1945. Son of Albert and Rose Julia Smith. His father Albert Smith was a town postman in Birmingham.

As said previously there is another name to add to this list and so I will do soon.


At the going down of the sun. And in the morning we will remember them.