I found this book amongst my late uncle's things. It is called A Student in Arms in memory of Donald Hankey. A Second Lieutenant of the 1st Royal Warwickshire Regiment who was killed in action on the Somme.  Now I think it belonged to my grandfather Michael (Mick) Hart who was also in the RWR as a private. 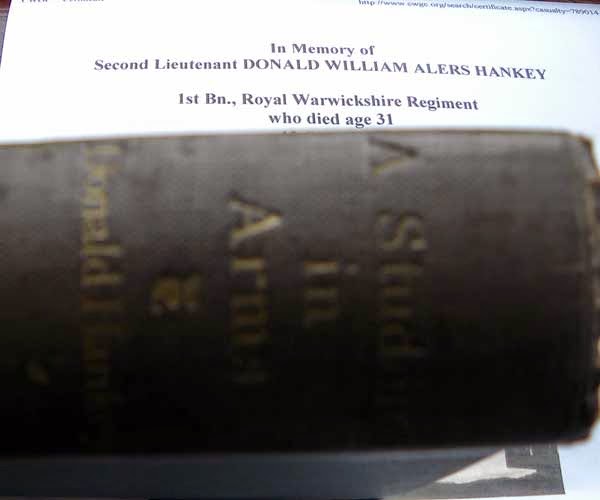 The book is a mixture of fact and fiction in essay form from a serving officer during World War One. It recounts the sights and smells of the men and the conditions they were in. From signing up to the actual marches to the battles and when stationed in the trenches. 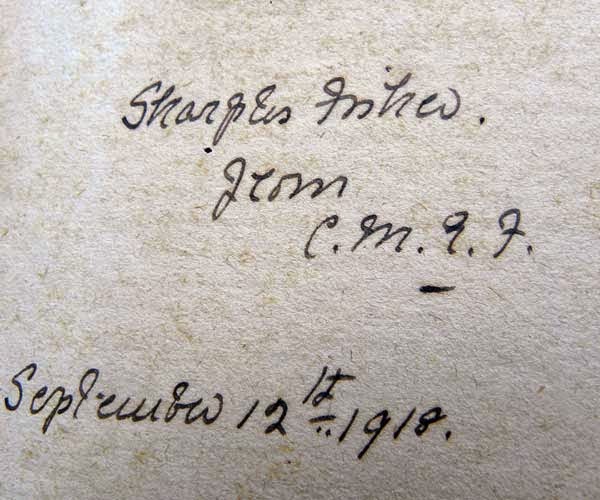 This is the inscription at the front of the book. Now I think it says Sharples ???? from C M ? F, September 12th 1918. But I may be wrong. Anyone else see what it actually says?

It is a very easy to read book and I managed this in one afternoon. But I do read far to fast according to my husband! Well worth reading if you are interested in WW1. Its still available quite cheaply on the internet to buy.

One passage caught my eye in the chapter A Student, His comrades, And Church. The men and boy here stand out in character and you know who they were in an instant. It just gives such an in site into life in 1915 and early 1916:

"Then there were the boys of the old platoon. There was Wullie, the dour pessimist from Manchester way, who died in England. Wullie was, I doubt not, a good workman in civil life: but he was sadly awkward at his drills. The student who was his sargeant, was ever pointing out his deficiencies, as it was his business to do; but Wullie could bear it no longer, and losing his temper told the sergeant in plain language of the North Country that had him set, and did not give him a chance. And because the student who was his sargeant kept his temper and was able to recognize the genuine grievance of a real trier, and answered with a soft encouraging words, Wullie never forgot it, and was his staunch supporter till the end.
Then there was Tommy, the Londoner with the big nose and the lively temperament. Tommy was Wullie's chum, because both were straight, clean-living men, and faithful to their wives. And though their temperaments, aye, and their class, were the same, and both had suffered for them in the rough life of the working world.
There was Dave too. Dave was a pit lad from Lancashire. His speach was plain and homely, not to say pungent. His humour was quaint and pithy. His strength and will to work were without equal. He was a faithful and loving husband and father to the little woman and kiddies in the far Lancashire village; and because the student who was his sergeant was able to help him a bit to go and see a child who was dying, Dave never forgot it. And when the sergeant fell from his high estate, Dave said "nowt," but used to purloin his mess tin and make it shine like silver, for in the art he was mighty cunning; and the student knew what he meant, and will not forget.
Then there was little Jim, from Brum, at sixteen. He was the awkward grace of a colt, and the innocent, pathetic eye of an antelope, mischief and secret mirth lurked in the corners of his mouth, and his heart was strong and undismayed like the heart of a lion. Jim shall not be forgotten" 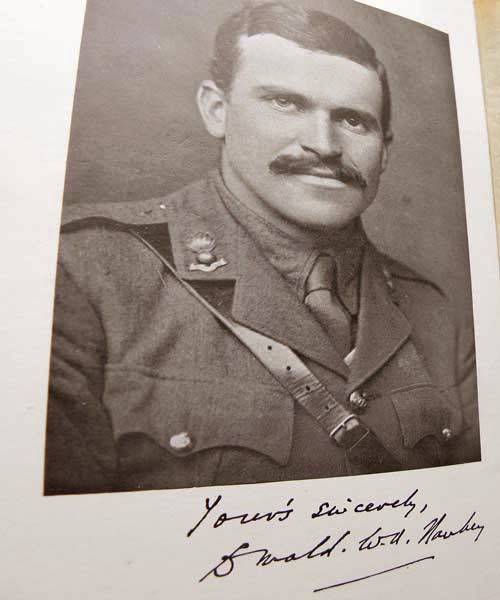 Donald William Alers Hankey. Who died aged 31 on 12th October 1916. Son of Robert and Helen Alers Hankey, who lived at 1 Chesham Place, Brighton. He is remembered with honour on the Theipval Memorial.