This is the information and names on the Elmdon War Memorial, which is situated just outside St Nicholas Church in Elmdon, Solihull, West Midlands. The church is also known as the church in the park. About 7 years ago, I had a few months where I had severe dizziness. Not being able to get out and do everyday normal things. I started to research my families history on the computer. When a little better I started to take note of the War Memorial in my area and to photograph and list the names on them. Strange occupation - well not really if you are looking for a great uncle' memorial who died in the second world war. Still haven't found a local memorial for Frederick Ward (1918 - 1944), who lived on Valley Road (now Solihull) - but I live in hope. He is listed in the Birmingham Hall of Memory book 2 though, but not locally. 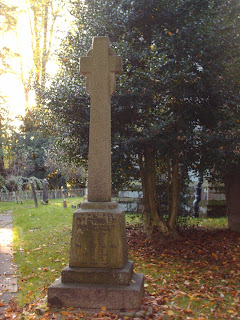 This is the Elmdon War Memorial taken in about 2007. 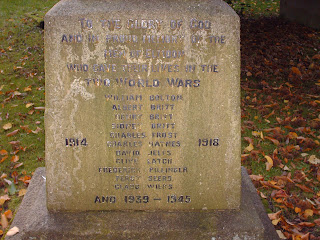 The wording and names on the plaque are as following: 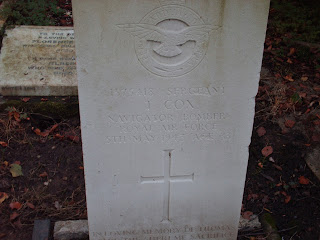 The only other gravestone that is in the small church yard with a war gravestone is the one above.

1575418 Sargent T Cox, Navigator Bomber, Royal Airforce. 5th May 1943 aged 33. Son of Thomas Benjamin and Florence Elizabeth Cox, of Solihull, husband of Anne Cox, of Sheldon, Birmingham.
In loving memory of Thomas. Made the supreme sacrifice until the day break and the shadows flee away.

Information can be found on the War Graves Commission website  and they are on the memorials in other countries. But I wanted to know a little more as how many times do you pass by and not have a clue about these people. So I cross referenced  what information I could find and discovered just a little more on some of the brave soldiers.

Royal Army Medical Corps born Aston in Birmingham. Enlisted in Birmingham Private no 103149 died at sea on the 4th May 1917. He was on the transporter "Transylvania" when it was torpedoed of Cape Vado. Over 400 soldiers died. In the 1901 census William was living at Court 18, 7 house Clifton Rd in Aston Birmingham. No father shown but mother Eunice from Bolton a washerwoman. William was 14 and an office boy and porter. He had 4 siblings of Flora G (12), Herbert (10), Thomas (8) and Eunice (6).  From this census he would have been about 30 years old when he died at sea.  In 1911 William was a school attendance officer for Birmingham Education and he lived in Aston Manor.

In 1901 some of the Britt family lived at Elmdon Heath. the father William Britt was 49 and a bricklayer born in Hastings. His wife Mary was 47 and born in Staffordshire. Their children were Ernest aged 17 a cycle worker born in Sheldon. Henry aged 15 born Sheldon, Cyril aged 13 born Elmdon, Ethel aged 10 born Elmdon and Sydney aged 8 born Elmdon.

Identification can sometimes be a little difficult from a census as they may have been listed under their nickname or use their middle name, especially if the father was the same name. However Ernest, Henry William, Cecil and Sydney are all the names given under their birth registration in Meriden.

The following Britt information are as such:

Albert Henry Britt - Coldstream Guards 1st Battalion. Born Birmingham, enlisted in Birmingham and lived in Solihull. Private killed in action on the 29th October 1914 in France and Flanders aged about 35.
Born 1879 in Birmingham. In 1911 he lived at 3 The Row, Elmdon Heath with his wife Rose aged 28 and four children Annie, Ethel, Edith and Albert. He was a bricklayer and labourer. He is also on the Solihull Memorial.

Henry William Britt born in 1885. Unfortunately I have been unable to find any further information for a Henry William but a William Henry was born in Elmdon, he was 26 years old. he lived at Dury Lane, Solihull. He lived with his wife Lily and children William and Beatrice. He was a general labourer. Britt W H of the Royal Berkshire Regiment 5th Battalion. He was a corporal number 37397. He died on the 27th November 1917 of wounds aged about 32. He was formally of the 4/10619, R. War. Regt. He is also mentioned on Solihull War Memorial as William Henry Britt.

Sidney Britt - South Wales Borders 4th Battalion. Born Birmingham, enlisted Birmingham and lived in Knowle. Private no 3/24880 died 13th February 1917. He died of wounds in Mesopotamia. In 1911 Sidney was still single and living with his parents in Elmdon Heath. He was a plate eager and would have been 24 when he died. He is listed as L Cpl Sidney Britt on the Solihull War Memorial as well.

Private in the Royal Warwickshire Regiment 11th Battalion no 8257. He died killed in action on the 11th July 1916 aged 21. He lived in Small Heath, Birmingham. Son of Emily Frost of 68 Watery lane Small Heath and the late Charles Frost. Although there is a Charles E Frost listed on the Solihull War Memorial of a different regiment. Which may mean that it is not the same person and as yet have found no connection to Solihull.

Charles Haynes of Elmdon enlisted in Birmingham aged 31 - a bricklayer by trade. Son of the late Charles and Annie Haynes, of Elmdon, Birmingham. Unmarried and a sergeant and service number 200523. He was killed in action on the 4th October 1917 aged 35 . He was mentioned in dispatches by Field Marshall Finch on 13.01.16. Charles Haynes senior had been the estate bailiff and gardener for Elmdon Heath. He and his wife Annie and brother Victor, a professional footballer and sister Annie lived in Elmdon in 1911.

Corporal of the Middlesex regiment 26th Battalion. He died the 13th September 1918 aged 22. Son of Harry and Matilda Jelfs, of Paxford born in 1895, Chipping Campden, Glos. Native of Bretforton, Honeybourne, Worcs. He lived at Lifford Lane, Kings Norton when he enlisted at 20 years of age. He was a carter by trade.  His mother Mrs Mitilda Jelfs lived at Marston Green Lane, Elmdon in 1919 when his property was returned to her in 1919.

In 1901 Percy lived with his mother and father, Eliza and Samuel in Bickenhill one of 9 siblings. His father was an agricultural labourer. He was born in 1898 and would have been 18 when he died.

He was a corporal K R RIF C. He is also on the Solihull Memorial for the First World War casualties.

Will be looking at several more War Memorials over the next few months in the area of Solihull and Birmingham.