This weekend I picked up another wedding album at our local car boot. For the sum of £1.00, it had no details on where or who the happy couple were. 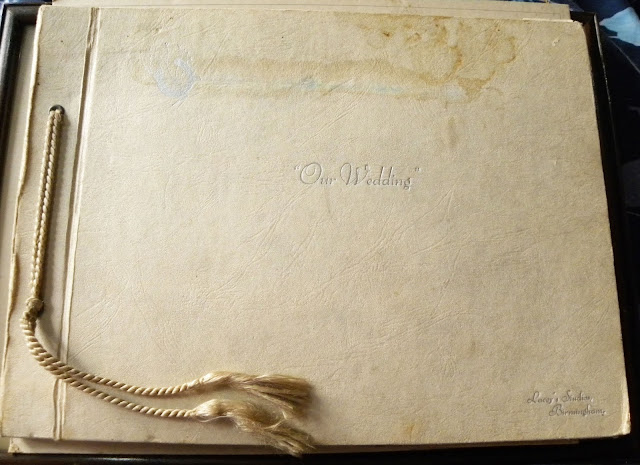 Yes it is a bit tatty and has stains to the cover. It also appears to be intact. It doesn't have as many photographs as some I have seen. It is also probably the one kept by the bride and groom. Parent's albums were smaller. The wedding photographers were Lacey's Studio, Birmingham. 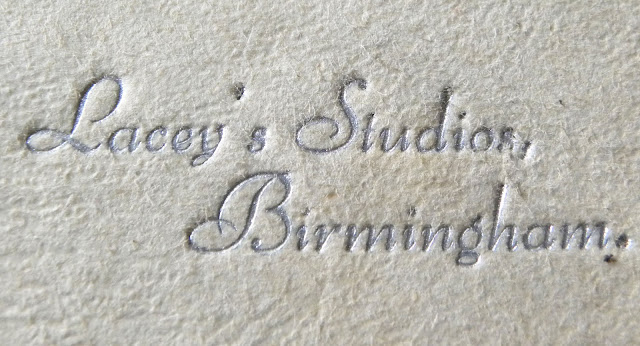 Lacey's Studio has been in existence since 1895. Originally based in Small Heath and now located to Solihull. It has changed owners a few times - but brilliant that a local business is still going strong. 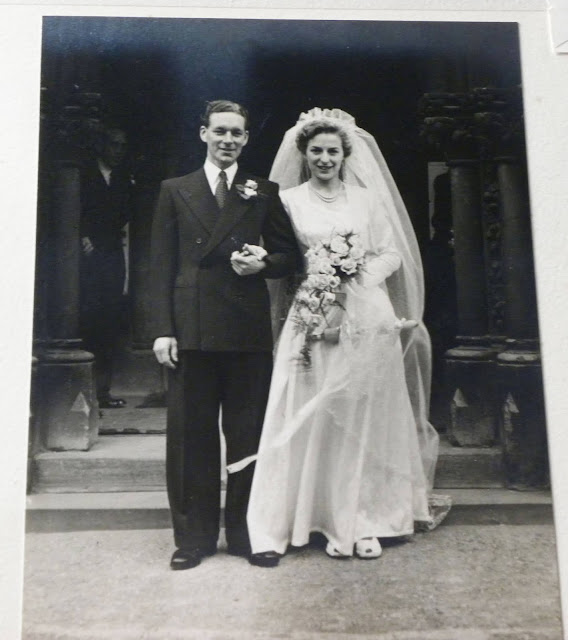 Here are the happy couple just emerging from the church just after they married. You can almost hear the church bells. This photograph shows the bride and groom. I would guess that it was taken around the 1950s. Probably in the later part of the 50s. 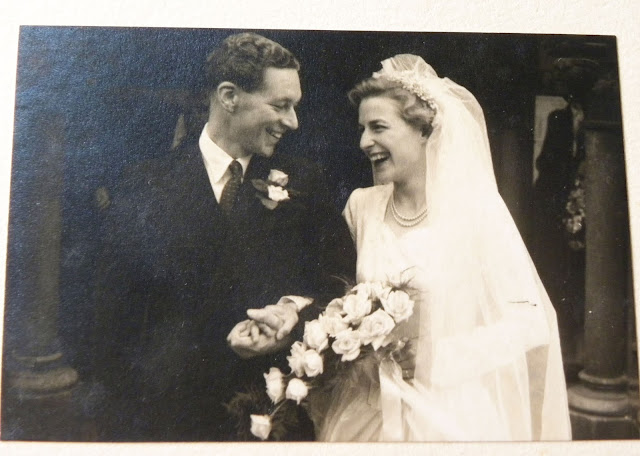 The groom is wearing a traditional double breasted suit jacket with turn up trousers. The bride is a little bit more up to date. Her shoes are the open peep toe and showing over her dress length. It looks to be fairly plan with just lace trim and seems to have a jacket over the dress. A double strand of pearls and long length veil completes her outfit. 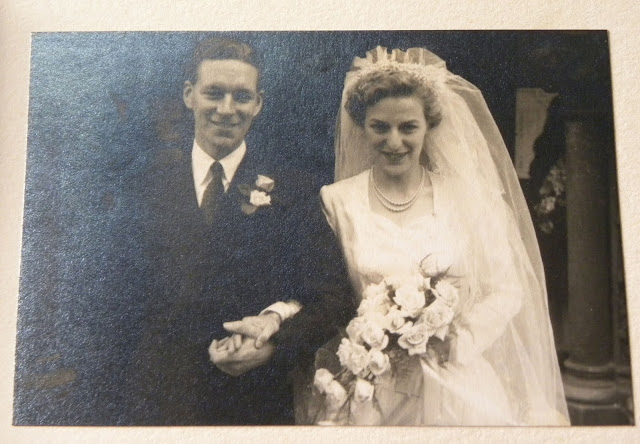 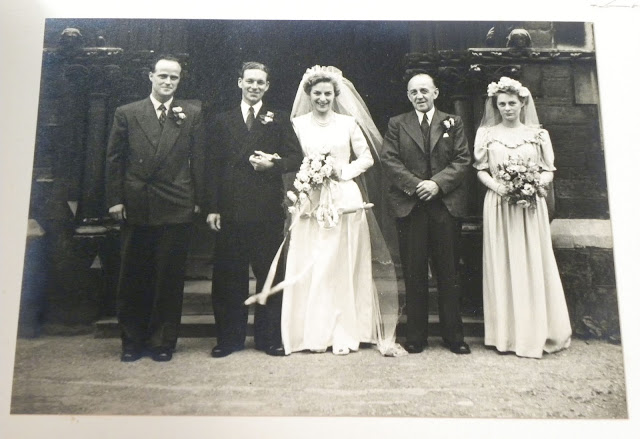 The distinctive entrance to the church indicates that it is St Mary The Virgin in Acocks Green, Birmingham. It is the church that my parents married in. As well as the church that I obtained a wedding album a few years ago from eBay. That was from the 40s/50s as well. The happy couple were also unknown. 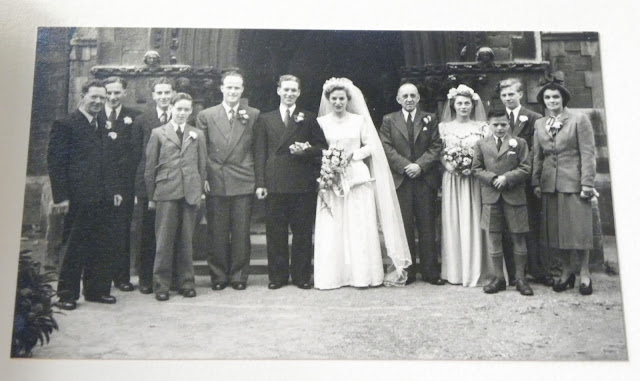 Now normally there is a photo of the bride and grooms parents. But here it seems to be not one. Only this one. It has the grooms side being mostly of men. Would say best man and the grooms 4 brothers. On the bride's side is her father or grandfather to give her away. The bridesmaid who looks to be very similar to the bride so maybe her sister? Then a woman who may be her mother or older sister. Then two young boys. Love the shorts trouser suit on the youngest. 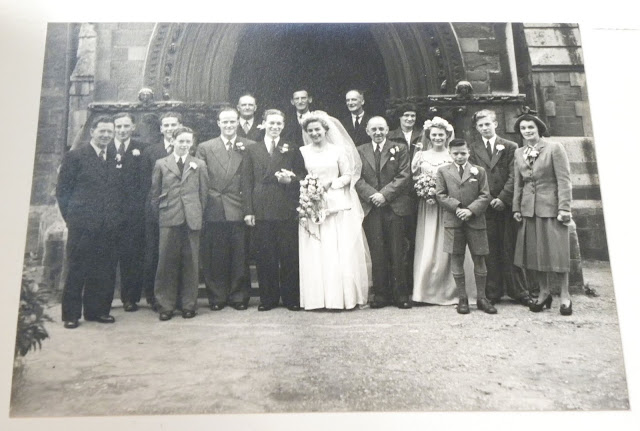 All the wedding party have a floral button hole and the bride and bridesmaid have a traditional floral hand held arrangement. I wonder what colour the bridesmaid dress was. It is unlikely that the bride wore anything but white for her first wedding. 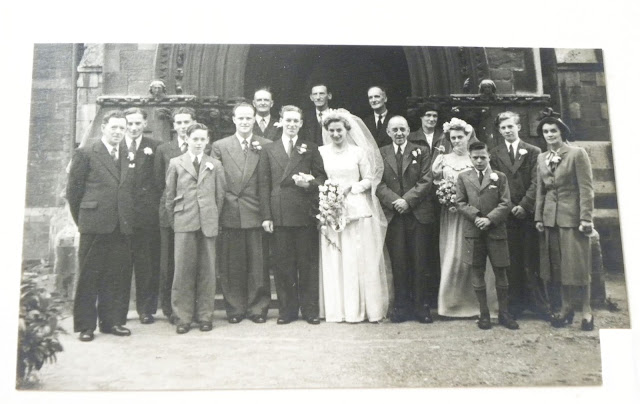 A couple of photographs show 3 elder men at the back and another woman. This may be uncles and aunts. This family does not seem to have many women in the photographs. 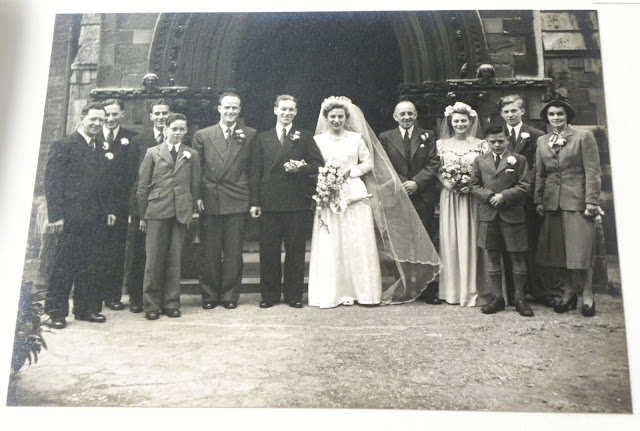 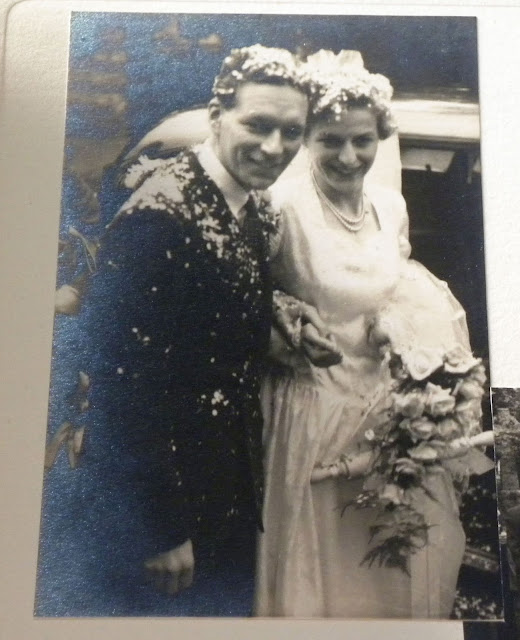 A nice photograph of the smiling couple leaving and covered in confetti. It was very traditional to give the couple good luck items. See the rolling pin in this photograph. Also lucky horseshoes, doves and black cat wedding day gift were popular 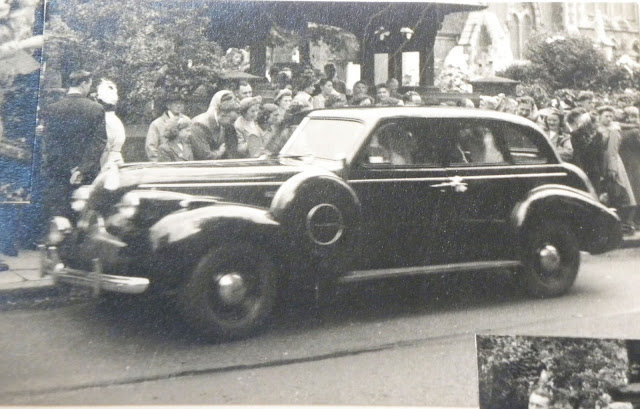 Leaving the church with all the well wishers and wedding guests on the pavements. Note the wooden arch to the church. You can just see the bride and groom inside the vintage wedding car. 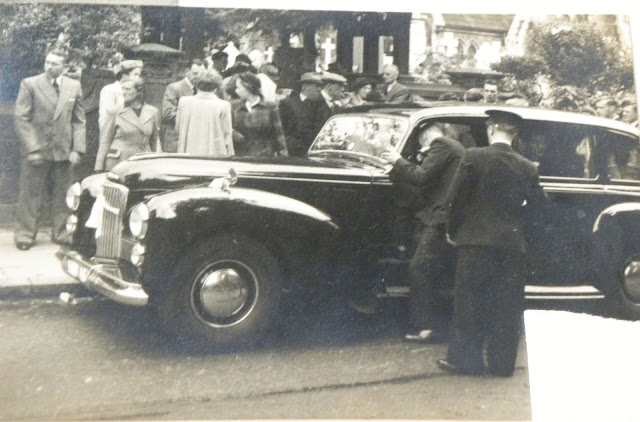 More of the wedding party leaving the church to go to the reception.
Unfortunately there are no names to indicate who this wedding album originally belonged to. If you recognise anyone. Please message me. and let me know. In the meantime it will be preserved as I have with the other car boot photograph, brochures and newspaper clippings that I come across on my travels.
Posted by Sue at 15:20