Framed 1920s wedding photograph from Exeter. Who are you?

From my last blog post, I brought this glass framed photograph along with a school cricket photo from a local car boot sale recently. It was from a seller who looked as though they undertook house clearances. The wedding photograph is of a bride and groom who married in the twenties. 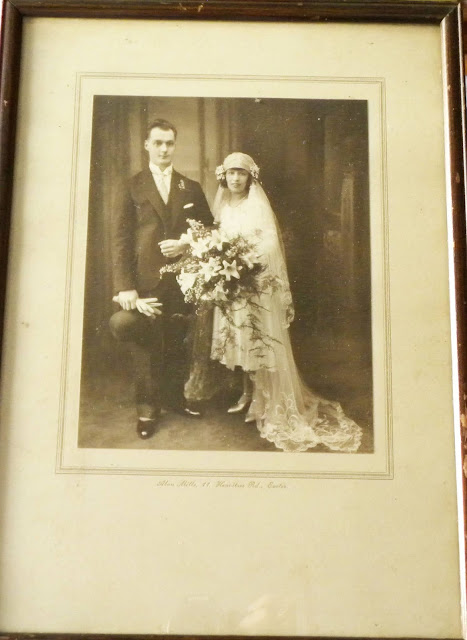 Now I have just photographed the framed pic as I received it. The glass needs a good clean and the paper covering at the back is ripped. However the photograph is undisturbed held in the frame with it's original nails.

There is no identity to this interesting couple, but the name on the bottom indicates the studio this photograph was taken at and framed. The car boot was local to the West Midlands. But the photograph was originally taken in Exeter. Under the photograph it has Alan Mills 11 Heavitree Rd, Exeter.

A quick research of Alan Mills photographers brings up plenty of photographs that his studios undertook. But very little on the actual photographer. So with a bit more digging..

Alan Mills was 40 in 1911. In that census he lived with his wife Annie and their 2 children Eileen 16 and Marion 15. Interesting that Eileen was a scholar where as her sister Marion was a photographer's assistant. Also living with the family were borders Mildred Davis 1, George Spivey and his wife Martha and daughter Irene 11. In 1939 Alan is living at 11 Heavitree Rd and at 68 is still a photographer. There is a Louise and Beryl Mills born 1916 living with him. Louise is his wife Annie L Mills and Beryl may be his granddaughter or another relative.

In September 1917, his daughter Eileen Mills married Frederick Green at St Sidwell's church. In August 1919, his youngest daughter Marion married Ernest Curnow at the same church. The photograph is of neither his daughters as the brides carried daisies and roses respectfully. The twenties bride above has a beautiful big bunch of lilies.

In the local paper on the 21st March 1940, Mr Mills was said to have been a photographer for 38 years. Prior to that he was employed by Messer's Heath and Messer's Bradley in the city. Alan Mills was born in London and travelled extensively in his younger days. He knew several languages as travelled to Germany, Russia and Poland. He took a keen interest in European affairs and died after being ill just a few short days. 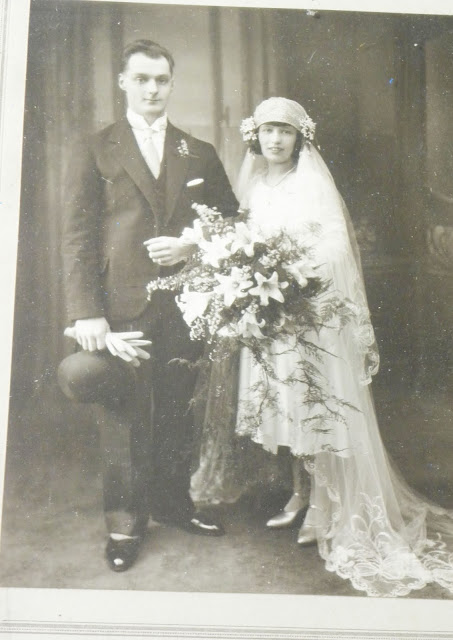 Back to the twenties bride who looks so very dainty and not very tall. She has a tunic overlaid with lace. A long floral lace veil and a huge bouquet of lilies and gypsophila. A single row of pearls is around her neck. The groom has a pair of gloves and a hat in his hand. I hope they had a long and happy life together. 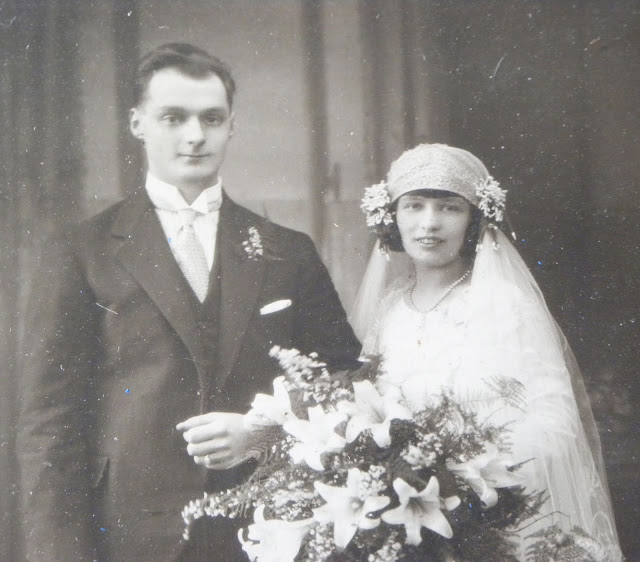 How this photo ended up many miles away is just part of someone's history. Where has it been in the last 100 years or so. Was it work that brought them inland? Or did the groom come from the Midlands originally. So many unanswered questions. If you can help fill in the details. Please message me below.  More car boot family history finds coming soon....