If you are researching your ancestors the proper way - That is by obtaining birth, marriage and death certificates to verify that you have the right family as you track back in time. You will invertible find some are wrong when you have ordered and paid for them. Very frustrating and a waste of your money. But at least it will eventually sort out who is wrong and eventually you will get the right certificate.

I have a few that I want to share, that I brought but they are not my family. 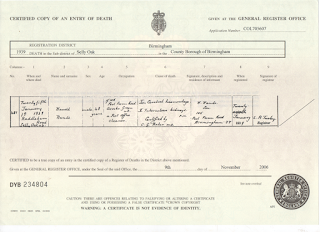 This is a death certificate for Harold Hands who died in 1939. He was 48 and lived at 105 Pool Farm Rd, Acocks Green. His son was the informant. As my Harry Hands didn't have a son. He was the wrong one. 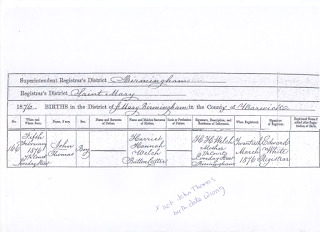 I hunted high and low for the birth certificate of John Thomas Welch. A very popular name in the early to mid 1870s. This is a birth certificate that was in the same quarter and year of the one that was my relative. John Thomas Welch born the 5th February 1876 to Harriet Hannah Welch of 7/2 Court Loveday Street. No father named so was illegitimate. 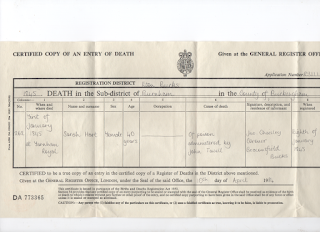 This death certificate was discovered amongst my uncle's things. With letters to a genealogist in London. It looks as though my uncle was looking to see if this poor lady was related. However, Hart was not her birth name. Sarah Hart died on the 1st January 1845 by poison administrated by John Tawell. She died in Yarnham Royal in the county of Bucks, Eton. The poison according to extensive newspaper reports was Prussic Acid. The trial of John Tawell was carried out in Aylesbury on March 12th 1845. John a Quaker wore a black suit and apparently had a "small shrewd looking eye with a slight caste" He was a chemist and druggist by trade. After his first wife died. Sarah Hart of about 30 years of age became his housekeeper. There relationship developed and Mrs Hart became pregnant. She then left John's home and lived in London, Slough and eventually Salt Hill. Sarah had two children, the first child of John Tawell was born in 1841 and she depended on John for support. John married again to a Sarah Cutmore. Supporting two women was a bit too much for John. He became deeper into dept.
So he visited Sarah and after she went and brought a bottle of porter, he added the Prussic Acid. She died in agony shortly after. Whilst her neighbours attended her, John left quickly and went home. But the police were quick to follow him and arrested him the next day. First he said he wasn't there and knew of no one living in Slough. Then he said she had pestered him for money, threatening to kill herself if he did not give her some. So when he went to her home. She had poured a beer and added the poison herself via a small vial. It was discovered that John had purchased not once but twice the poison, saying he had lost the first bottle. A friend gave evidence that previously after a visit by John and Mrs Hart drinking porter - she had been very ill for a few days but recovered. Eventually John Tawell was found guilty and sentenced to death by hanging

Newspaper reports of John Tawell's life and subsequent death by hanging. At no point did he confess to the murder. But all the evidence supports the fact that he did kill her.
Posted by Sue at 10:02