My family wedding from my Hart side but who?

My family wedding from my Hart side but who are they?

If you have been following my blog - you will know that I collect old photographs and ephemera from mostly car boot sales. In the hope that it will help others with their family tree and their family history research  I also hold a large collection of photographs taken from my close family members that have sadly passed away. Many are unfortunately not named on the back. So I have to find out who they are to give faces to names. For those of you that have the family history bug, you will know what I mean!

A few years ago, my uncle passed away. He lived in our family home in Small Heath, Birmingham and had many photographs that belonged to my grandmother and grandfather. I rescued a whole box of photographs and have tried to find out who the people are by asking older members of my family and using family tree research websites. In this huge collection were two wedding photos. 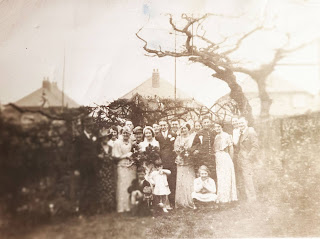 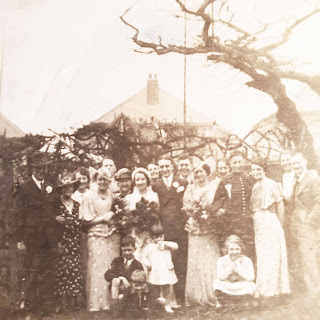 The above two photographs are from the same one. The first is the original. The second has been cut in size and sharpened and enhanced to hopefully see the features a bit clearer. The small boy at the front I am sure is my late father, Brian Hart. He looks to be about 2 to 4. Which makes this wedding to have taken place in the mid 1930s. Behind him is my late uncle Francis Hart and the older girl at the front is my late aunt Patricia Hart. I do not know who the other child is. She is too old to be any of the other Hart children. The elderly lady behind the bride to the left is Catherine Hart nee Varley my great grandmother.

The very tall man to the far left I think is my grandfather, Michael Hart and my grandmother Edith Feege, is not the woman next to him in the hat, but the one next to her (behind) with a wide smile and dark hair. 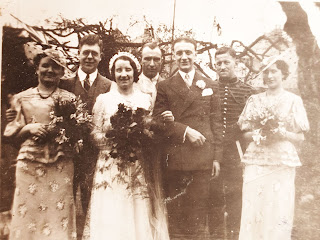 None of the wedding party can I identify. Both the bride and groom look to be older, maybe in their late 20s. I would have said that they are from Hart descent as the groom has the typical "Hart" features, but he could be a Varley? Or he may have just married into the family and the bride is my relative?

The wedding party traditionally stand on the side of their relative and the Harts are more towards the bride's side. So likely the bride is my relative! I suspect they are from one of my grandparents brothers or sister and related rather than just a friend. But as they both had lots and lots of children....

The wedding party was in a house as you can see the other houses from the first photograph taken in the back garden. It was not my grandparent's house as their back garden had a school behind and playing fields. The trees are quite bare, so the wedding would have been during the winter or early spring.

In this photograph we have the two bridesmaids, the bride and groom and three men. One of the bridesmaids on the left has the man behind holding her. The man in the soldier uniform to the right, I think is the best man. However the bridesmaid to his right is not his partner. If you see the main photograph of the whole group. He has his arms around another woman. The uniform looks to be of the Coldstream Guards and he is carrying a hat in both pictures. Interestingly, my uncle Mike (Francis Hart) joined the Coldstream Guards later in life. I actually think this is the "brothers" photograph and the groom is one of 4 brothers.

So if you have Hart or Varley in your family tree that settled in Birmingham, England - please take a look and see if you recognise anyone, then let me know.