On this day that is commemorating the 100 years that have passed on that dreadful first world war that claimed so many young men of many countries. I can not help remembering the young man that died at the Somme on the 1st of July that was part of my family.

Frederick Horrocks - my nan's brother in law by her first husband. Charles 4 years older was also away and serving in the army at the time of his brother's death. He was also not only my step grandfather, but a blood relative as my nan married her first cousin.

My nan never talked about her first husband's family. Not to us, her grandchildren or to her own children by Charles. I think it was a thing at that time that people did. Death was very common and to cope they just did not dwell on what had happened and moved on as best they could.

So I have traced my great uncle/third cousin's life as far as I can find. When my nan was alive - I never knew he even existed.

Frederick Charles Horrocks born in 1898 in central Birmingham, England and lived at 29 Lennox street, Hockley. I have found 4 siblings before him and another 5 after him - but by 1911 he was one of 10 born with only 8 living - so more to find and add to our family tree soon.

At 14 he was an errand boy for the silver trade at the Jewellery Quarter in Birmingham. At 16 he joined the army. It was 1914 and he was soon in the Royal Warwickshire Regiment. He was not alone. His father Edward, and brothers William, Arthur and Charles also joined up.

At 18 he had died at the Somme on the 1st July 1916. The others returned home safe, but Charles, my nan's husband was ill and didn't live long after.

This is what was said in the National Roll of the Great war about him..

Private in the 8th Royal warwickshire Regiment. Volunteered in August 1914, he was drafted to France the following November and was in action at many important battles and engagements until 1916. When during an advancement on the Somme he was unfortunately killed.
He was entitled to the 1914 - 1915 Star and the General Service and Victory medals.

His body was never found, so presumed dead. His mother Emily received 5 shillings and 6 pence. His father Edward got 8 shillings and 10 pence. I have no idea where his medals went to. If they were ever claimed!

One day I would like to visit. I have no photographs or any indication that he lived in any of my grandparent's paper work that they left. So it has been just searching the archives to find him...

So a hundred years on - Frederick Charles Horrocks - you were so bloody brave and you are remembered.... 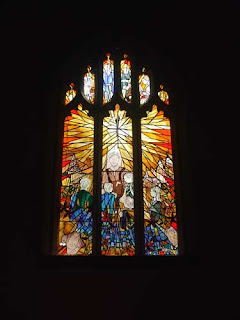