Photographs of the Victorian dead

Photographs of the Victorian dead - A Victorian conundrum!

The Victorians were very happy to take photographs of their dead ... children, wives, fathers and other relatives. Not some thing that we do very often today. Yes we still do take pictures of still born babies and our children that die young; but to whip out your mobile and take a photograph of dear departed grandma - no. Can you imagine the Facebook likes! I was being flippant when I mentioned Facebook. I can not imagine that someone would post photographs of their stillborn baby on Facebook for the world to see. But my daughter in law has told me recently that someone had. Very sad and a bit unsettling. Yes share with close family and friends, but not to expose to people who you do not know on Facebook. 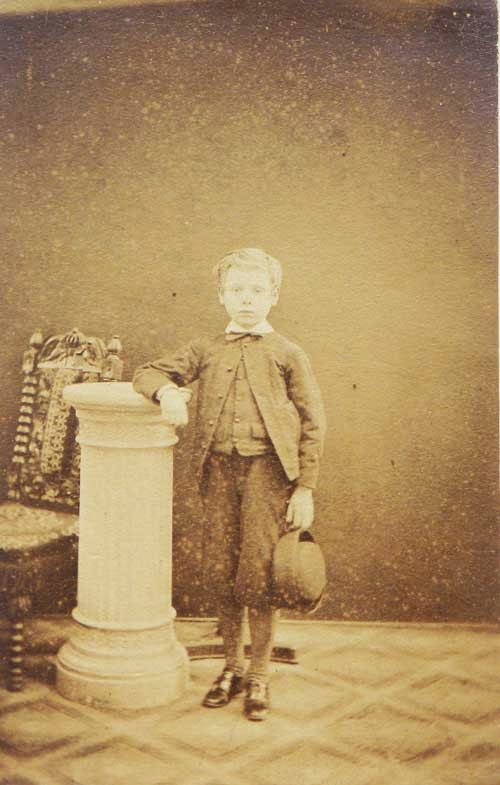 This young boy was in a collection of old photographs that I brought a few years ago. Notice the wooden stand behind him and the classical arm on the post. The stand holds him upright and his hat must be pinned to his trousers. His hand is not actually holding the hat. Unfortunately there is no name or an indication where the photograph was taken on the back.

Some rather rude and obnoxious person added a comment to this page recently, and stated that the stands were to keep people still whilst they took the exposure. Well - anyone who has had a child would realize that a wooden stand is like giving a new toy! Ideal to slouch against, bang or tap with your head, heel or arm. No - probably not a good way to keep a child still!!
The stands would hold a person upright, probably had head pieces and under arm supports. The Victorian's were very good at making things fit for purpose - far better than we are today.

People and children were much shorter as well as lighter then. Most due to being under-nourished. Rigor mortis sets in after 4 to 6 hours, where the body stiffens. But apparently not so much in babies and children. This was due to their muscle being absent. I am assuming this would have made it easier for the photographer to position a child.

Unfortunately, as a nurse I have had many an occasion to witness death. Most people will die with their eyes partially open or open. It is us, the living that close them. I did it because that was what had always been done. I did not question why? Is it because when someone's eyes are open - they still look alive? Or is it because by closing someone's eyes, they look asleep. More at rest and at peace. I think it is done for the living, not for the dead. So that we did not have to look into eyes that had no soul or what ever makes us human and so alive!
Any how I digress - if you are planning to have a photograph. Would you want their eyes open? So instead of closing them, maybe the family would open rather than close their eyes soon after death.
If their eyes were closed - they could have died in hospital or else where? There are photographs of people who have died with very odd looking eyes. It appears that the eyes have been drawn in after wards, so they look open. Not sure whether it was the photographer who did this (though he would need to be very good at it or his income would drop!!), or a close relative or loved one when grieving, long after wards.

When was the photograph taken?

So this got me thinking about the Victorian era! What did they do to get a photograph - the pure logistics of it?
For a start most people died at home. They did not go to hospital very often. Cared for by their relatives, who were there at their death. Once someone had died, the family would wash and dress them for burial. Cremation was not carried out very often as now, it became more a necessary in the 1950s as we started to run out of burial ground space.
They would have been seen by a doctor to issue a death certificate after 1879, before that they just needed to register a person' s death at the church or nationally after 1837. No cause of death was needed. To be honest, most of the times it was unknown.
** These were England's regulations and will differ in other countries.

Once a body was prepared, it was kept in "state". That means, it was placed in a coffin and placed in the best room of the house for the family to all say goodbye and pay their last respects.  Not prepared by a funeral director and taken to a funeral home as done by most today.
Note - For many young babies, they did not have their own coffin. Because of money being tight. Many would pay an other family (not related) to place their baby in an adult's coffin at burial.

I am guessing that if you had money. The photographer would come to your home and take "in mortem" photographs. Otherwise you would have to take the body to them. So when would this happen? My best guess would be on the way to their funeral and burial. Most burials would be done quickly - within a day or two following death. As with no special preparation of the body or cold storage, the body would soon start to decompose and start to smell.
The coffin would be most likely carried if you were poor. If you had money then it would be taken in a carriage to the church for burial.
I would suspect that the photographer's studio would be positioned on a church route. The family would stop briefly and have some photographs taken - before completing their journey to the church and the person's final resting place.
If you know how and when they went for a photograph - please leave a comment. But if you are rude and an obnoxious troll it will not be published.

I looked also at my own relatives and thought that this photograph was a bit suspect. I am guessing this was Agnes, but seeing another photo with this girl and her family. It doesn't look like Agnes but Margaret Piske. 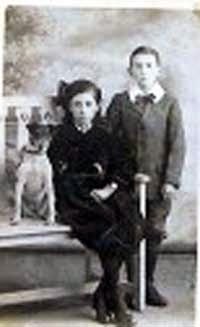 The little girl is seated with a boy standing besides her. I do not know who they are, but as a guess it may be may be Agnes Hart born 1896 and died 1903 with her younger brother. One of the 13 children my great grandparents had.
If you look closely their is something around her head. On one side it looks like a hand and a shadow behind her! How they got the dog to sit there I do not know. Maybe he is dead also and stuffed? Must have been a brilliant photographer that managed to get two children and a dog to sit still!! The photograph is not brilliant - but on the original there is a hand and shadow behind. One day I will get around to taking another copy that is better.
February 2022 update - Latest thinking was that photographs were not taken with the body standing or sitting but lying down in a coffin. But rumours came from somewhere. Babies were taken with their parents holding them too. Maybe we will never really know.

Morbid - yes. But when they didn't have mobiles to record their life. It would be something done to preserve memories that are so precious.
Updated 21st February 2022
Posted by Sue at 10:41