I would say that the Victorians kept more memorials of their loved ones when they died. With photographs of their graves, of their loved ones when dead, hair jewellery and other keepsakes. Today we are able to take plenty of photographs with little cost. So able to keep our memories. However I do like to buy unusual things and when I found this photograph in a frame at a car boot last years. I couldn't resist. It was only 50p and as usual my family said - what do you want that for! 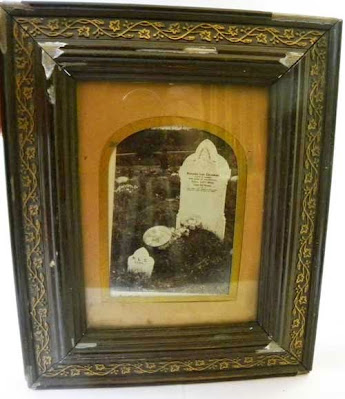 The frame is falling to bits but the glass has preserved the photograph card inside in an excellent condition. The grave is of a Richard Lee Colman. It says he was late of Barby who died at Willenhall. April 30th 1900, aged 66 years. It has the verse "And now lord what is my hope: Truly my hope is even in thee"
Of course I was intrigued - who was he and why had the card been commissioned as a memorial keepsake?  Also noticed that the flowers are under a cover? Like the ones used for cakes. Not seen that before.

So my research stared. he was born in 1834 at Barby in Northampton shire. This small village was about 5 miles from Rugby. So not a great distance from Willenhall in Coventry where he died. He left a will, so was a man of means at that era. His will states that he was a farmer. He left his wife Mary Ann Coleman (nee Haddon) and his son, Thomas Joseph Lee Coleman his money of £508 17s. A lot of money at that time.
In 1861 he lived with his father a retired farmer in Barby with his wife and young son Thomas aged 3 months. By 1871 he was still a farmer at Ashby St Ledgers in Northampton with 51 acres employing one man and a boy. Interestingly he has Thomas aged 6 and 10 year old Jone S Coleman as his sons then? The 1881 census sees him as a farmer now with 105 acres at Braunston in Derbyshire. With 1 labourer as well as his sons Tom and Thomas aged 20 and 17. He seems to have moved by 1891 and is in Willenhall on the London Road. Still a farmer living at "The Farm" He has his wife and Lee Colman aged 21, his son (Think this should be 31)? helping him as well as a servants Henry Walker aged 19 and Alfred Clarke aged 17 helping on the farm. There is also a visitor Mary Wood 25 staying there. Of course by 1900 census he had died and the farm in Willenhall belonged to his son Thomas aged 36, who had a wife Sarah and two small children Dorothy aged 2 and Richard 3 months with his mother Mary living on her own means. A servant Hanah waring aged 16 helped around the farm. 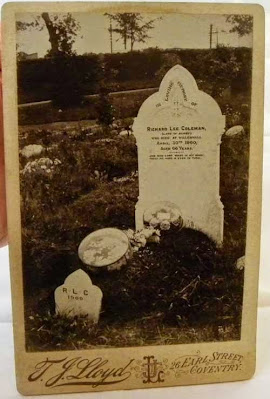 The card was photographed by T J Lloyd of 26 Earl Street Coventry. 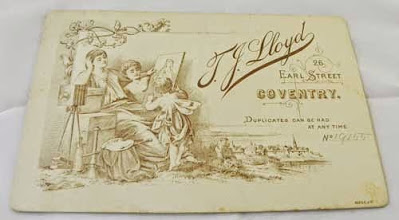 So there you go - someones life from a memorial grave side photograph. Do I have a connection - well Willenhall was where I used to work as a midwife. The area was where the farm was! Hows that for a coincidence. Soon will look at a photograph of a boy that was taken at death. Morbid but interesting as its someone in my family.