Looking for my ancestors and other family

Looking for my ancestors and other family to add faces to names and information about their lives.

In the last few weeks I have been able to return an album of photographs and taken scans of them, to give to three other family members. It was an album found in a car boot. Luckily the photographs had names on the back. From this blog and also on Ancestry the family contacted me. You can read the blog from August 2020 on here.

I can only hope that there are photographs and other information out there about my ancestors and their extended family. With Easter 2021 today, it is a time to reflect on what I am researching and looking for. I am compiling my family tree and making a scrap book type of info with pictures of addresses, family photos and lots more. To give a more comprehensive understanding on where I came from and to leave a legacy to my children and grandchildren. 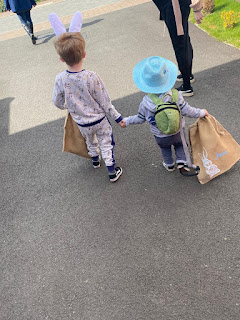 I have two grandchildren at the moment and another well on the way. Here are they yesterday on an Easter egg hunt around the estate. Those are my legs in the boots striding out front!!

Would be so grateful..

I would be very grateful to find family photographs long lost and war medals that have passed out of my families hands. Along with any documents, birth, marriage and death certificates or any information

The names I am looking for - are as following..

Hart - the family were in Birmingham, England but originally came from Roscommon Ireland. Large families and Catholic - so must be some more photos and info out there. navies and labourers working in brickyards and on building construction.

Kennedy - again from Birmingham and came to England during the potato famine in Ireland. Also from Roscommon and a place that sounds like Castel Dreary!!

Varley - from Birmingham and Mayo, Ireland. Again fled Ireland to escape starvation and poverty. Blacksmiths and horse farm workers. Married into the Graham or Greaham - depending on who wrote the name down.

Feege - just to completely baffle me. My great grandparents were from Germany. Koulm (possibly Cologne) or Polzin! Totally came to a brick wall on them. So help please. A tailor and possible cabinet maker.

Piske - again German but haven't any clue to go on. My great grandmother emigrated to Canada after spending time in London and Birmingham. She then, I believe decided to go find her two oldest children who were sent to Canada by Barnardo's. She was a tailoress working in Dean's clothes shop on Birmingham's High Street in 1911.

Ward - now they travelled around from Shropshire, Yorkshire and Staffordshire to complicate my life. My grandfather told us about Lilleshall but also said we were originally from Ireland - this I haven't found in the ward line (as yet) A long line of coal miners and agricultural labourers - depending on where they could get work.

Johnson - My great grandmother was Scottish. Born in Edinburgh. But her family actually came from Kenilworth! Imagine traveling in the early 1800s from the Warwickshire area right up to Scotland and then back to Birmingham!! One of these days I will find a line that just stayed in one place. Comb makers originally. They had links to Kenilworth Castle when it was not in ruins and when the work ran out. They travelled up to Scotland via Northampton.

Hands - My grandmother was ill when we lost all the family photographs to the Salvation Army. Her sister left everything to them and they refused my nan access to the photographs. They may be long gone to that great skip in the sky or still floating around somewhere - I just hope. Then there are the WW1 medals. Harry Hands in particular. He suffered from PSD and ended up in Highcroft and Rubery mental hospitals for the rest of his life. Heavily involved in the Salvation Army my nan rebelled.

Horrocks - Another family from Birmingham. Gun engravers and brass founders that worked and lived in the city. We have very little information. My nan married her cousin to make it more confusing. When he died she didn't keep anything except his WW1 medals. Way back the Horrocks came from Lancashire and a poor branch of the Horrocks cloth empire.

Of course I have looked at my husband and grandchildren's heritage. So...

Palmer, Hicklin, Howard and Adcock. Along with Grimshaw and Yeomans - all of Birmingham and Northern England. Only just started this tree. So have very little information at the moment.

Hoggard, Howe, Wilkin and Winson - from Bridlington, Kingston Upon Hull, Paull, Yorkshire, Derbyshire, Norfolk - again did they have to move around the UK!! Many were fishermen and lifeboat men. Also lighthouse and inn keepers. Must be some smugglers and pirates in there. There is also a vicar ancestor from Threlkeld in Cumberland.

Collins, Sandford, Boreham and Davies from London and Lancashire. Working on the railways and traveling from city to city. One family member killed in the blitz in London. Coalminers in St Helen's in Lancashire.

Moving back to Birmingham and Bromsgrove..

Weaver - Bakers by trade and unfortunately went bankrupt. Birmingham and Bromsgrove. One of the family married into the Ingram bakers.

Parton - from Birmingham, Staffordshire and Stakksdon in Shropshire. Labourers that fell on hard times. Widowed mother and destitute at one point.

Hull - from Birmingham, Coventry and Warwickshire. Ribbon and silk weavers for several generations. Before traveling to the town of Birmingham to work in factories.

Davies from Shropshire and Wales. Illegitimate children by whom we see? Martha Davies eventually married Thomas Preece from Pontesbury in Shropshire. So were Ernest and Joseph his or was someone else the father? DNA hasn't thrown any light on this yet. They lived in Meole Brace, Bayston Hill in Shropshire for many generations after. Until Winifred met Samuel and Florence met Thomas. They all then moved to Birmingham.

Richards - from Birmingham and Wolverhampton. Cordwainers or shoe makers in Deritend of Birmingham. Married a Squelch at one point in history - now that is an unusual name to track. A female wardrobe dealer when widowed. Foy is also another name in this family.

Lewis from Birmingham, Shropshire and St Masters in Herefordshire. Then from apparently from Wales. Working on the railway made travel so much easier. Another Preece from Hereford - so they must have been related somewhere along the line

Then the rogues of the family.

Lightfoot - from Birmingham and Ireland. Henry Lightfoot - the first named Peaky Blinder. Yes, I have a lot of information on this man. From the start of his life to the end. A rogue who was inclined to drink a lot and then do some stupid things! His real life may be in a book some day. So watch this space. Don't believe all the things written about him. Much of it is myth written for effect and he never had a gun.

Welch - again from Birmingham and Ireland. Morgan and Mecking descent. Imprisoned for theft with family tales of a murder. Drinkers and fighters through history. 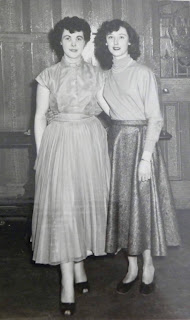 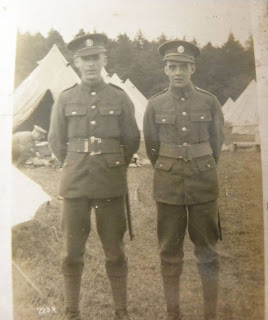 The tall man is probably Joseph Ward - but have no idea who the other man is.

Tracing your family is never ending. With more records coming online and being rescued. Increasingly more is available. So I am back to searching and "putting the skin and bones on my ancestors" rather than just census and BMD details. It makes it a whole lot more interesting. Currently reading up on Waterloo and the Napoleonic wars (one of my direct ancestors played a small part). Wish I would have the current knowledge, as I probably would have taken it in more during the history lessons at school!

So have a happy Easter all.