A short walk from Coughton Court in Alcester is the church of St Peter's. Inside is a wall plaque with the names and information of the men who died in the First World War. This grade1 listed building might be missed on a trip to the house but well worth taking time out to view. The war memorial plaque is easy to read (thank goodness) being in white with black wording. So my older eyes were able to transcribe this one without much difficulty. 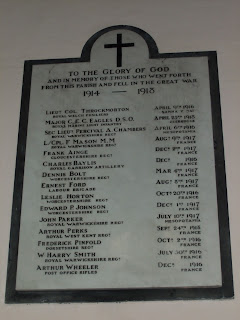 Underneath the black cross is the wording: 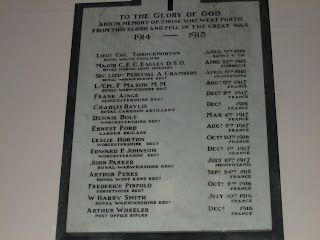 Lieutenant Corporal Richard Courtney Brabazon Throckmorton was just 49 (born 1866) when he died. Already a veteran of the Boer War and heir to the Coughton Estate.

Arthur John Wheeler was 26 when he died in France. Previously a rural postman living in River Cottage, Alcester, Warwickshire in 1911.He was in the 8th City Of London Battalion, Post Office Rifles. Interestingly other resources says that he died on the 7th October 1916.

More memorials to come in and around Solihull and Birmingham.