Just down Kineton Green Road in Olton is the United Reformed Church. It is sat on two road's corner with the church and the church hall joined together. Inside the church is a small plaque dedicated to men who died during WW1. This church was formerly the Olton Congregational church (1895 - 1972), known at one point as the church amongst the trees.

To the glory of God and in dear and honoured remembrance of the men of this church who laid down their lives in the Great War.

We will remember them. 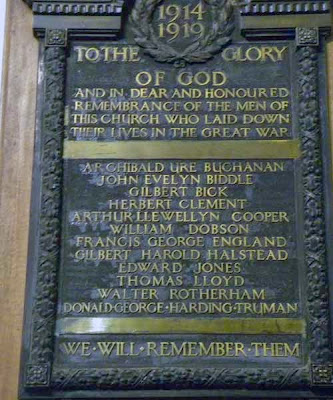 On one wall of the church is a smaller plaque that is a dedication for one of the above again.

To the glory of God and in loving memory of:
Arthur Llewellyn Cooper
Who gave his life for his country
19th March 1913 aged 20 years
I am the resurrection and the life
This tablet was placed here by his parents 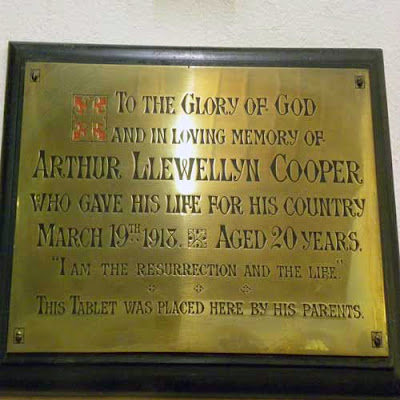 Arthur Llewellyn Cooper once lived with his parents on the Warwick Road in Acocks Green. His parents were an upholsterer and a china dealer. He was born in 1898 and died in 1918 in Flander, France. A private in the Royal Army Medical Corps, he died from wounds and gas inhalation.

Archibald Ure Buchanan died on the 27th September 1915 from wounds received in action on the 25th September at the Hooge. He was a second lieutenant in the Gordon Highlanders having transferred from the Warwickshire Yeomanry six months prior. Born in Dundee on the 3rd December 1895. He was the son of Robert Buchanan of Clarinnis, Olton and Elizabeth Dunlop from Dundee. Archibald was said to attend King Edwards Grammar school, Birmingham, but I have been unable to find any mention in the service record book for the school.

Donald George Harding Truman was born in 1891 in Aston, Birmingham and was killed on the 1st July 1916 at the Somme. He was a lieutenant for the 5th Battalion Territorials, Royal Warwickshire Regiment. His parents were George E Truman a commercial traveller and Caroline Truman, one of many brothers and sisters. Unlike the boys above who were either an only child or one of two. Donald had already been training to be a soldier at Hatton, Budbrooke in 1911.
Since I wrote this blog post. The church is no longer owned by the United Reformed church. It is now a community centre for the local people.
Posted by Sue at 18:58