Our house situated on Lode lane was built on farm land apparently (according to my mother) on corn fields. She remembers being able to walk across the fields as a child. How the area has changed. My great grandmother lived in a house on the very corner of Valley Road. They rented it for many years until her death in the 1950s. During the war (World War 2) there was an air raid shelter across the road. This would be just opposite the shops.
Surrounding the semi detached house and small garden in Valley Road was once a small wooden fence. Low enough to step over into the fields behind. Hard to visualize now with the houses built on that area and the need for additional security. The brook as in Hatchford Brook that has now been enclosed, was also my mother and her siblings play area and a small stream once run at the back of the houses on one side of Valley Road. That has also been covered over.
On a recent map. It shows the area around Valley and the lower end of Old Lode Lane towards the Wheatsheaf Pub to be on a flood plain. Not so good when you are trying to buy household insurance. With the threat of flooding now and increasing risk in years to come. It is important to keep the drains clear and not to concrete, build or brick over large areas. Unfortunately global warming as it is so called is a real threat. High winds and torrential rain cause chaos.
In our area there are many large tree that are probably a hundred years old or more. Especially the trees around the Olton Tavern - on the corner of Lode Lane and Old Lode lane, Solihull.

A few weeks ago on a Sunday morning one fell across Lode Lane. It had been very wet and windy but on this day it was dry and only a slight breeze. Even though trees are maintained, no one can really know what is happening with their roots and in certain conditions they can fall.

The tree just toppled over and blocked the one side of the road going towards Solihull. It was very lucky that it was early on Sunday morning and not in rush hour as it could have hurt someone at the very least.

Within a couple of hours the tree was removed by Solihull Council, I took a photograph - probably the only one available. 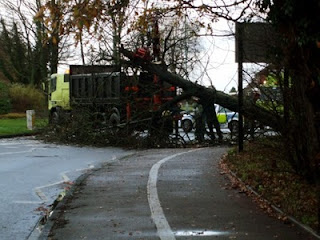 There are many large trees in the Olton Tavern grounds. Are they from the old hall or planted when the Tavern was built and converted into first into a restaurant. Many years ago it was an American dinner! We are surrounded by history and it is part of our heritage.
Posted by Sue at 12:04